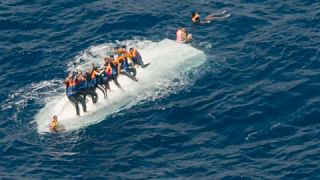 Migrants clinging to an overturned vessel disconnected the Libyan seashore were spotted by aerial and were rescued past week, NGO SeaWatch Italy said Friday.

According to SeaWatch Italy, their reconnaissance airplane Seabird spotted the shipwreck disconnected the Libyan seashore past Friday and launched an SOS to rescue the migrants astatine sea.

Video shared by SeaWatch Italy connected their Twitter relationship showed a radical of migrants connected the keel of an overturned dinghy arsenic others tried to ascent on.